Getting caught while speeding in France. This simple phrase actually has many different possibilities. Especially since Brexit. Let's go through them. You can find on the following page the different french fines for speeding.

Stopped by police for speeding in France

This is true whatever your car registration.

If you are stopped by the police for a speeding offense, they will ask you to pay on the spot. Cash or credit card. No escape here. But most speeding tickets nowadays are not delivered by police stopping you on the side of the road, but by automatic speed cameras, most by the side of the road, some onboard moving vehicles.

Getting flashed by an automatic radar, UK registration

Before brexit, british drivers would receive the fine in their mailbox in the UK. How, simple, french authorities would request from the DVLA (Driving and Vehicule Licensing Agency) your driver details, and thus easily send the fine. This process was reciprocate, between France and the UK and most european countries.

Brexit does change that, as now, the DVLA will not send your driver details to EU authorities. And the reverse is also now true.

So if you drive in France with your UK registered car, and see a flash while passing by an automatic radar, you won't be fined. The fine will never get home.

Was that worth a brexit? We will let you judge.

However, the french police might put in place some kind of checks at the border, say at Calais or Boulogne, to make sure the cars leaving do not have a recent speeding listed in the IT system. At least, if i were a french official, i would strongly consider that... To get some of that 3 millions monthly € back...

Getting flashed by an automatic radar, EU registration

This is most likely in case you are renting a car while on your travels in France. It could also be the case if you borrow a friend's car or something similar.

Well in that case the fine will be sent either to you via the rental car agency (they will add a hefty processing fee) or via your friend.

Let's assume the most likely scenario which is rental car. Not only will the rental car agency send you the fine, they will already have charged your credit card with the amount due (plus the processing fee), so you won't be able to do much.

In case they would have been unable to charge your card (for exemple, credit card expired or "lost" just after your trip), they will ask for the money. Now, as a subject of your king/queen, you will decide what to do with that request.

Another possibility would be that you own and drive for exemple a spanish registered car and get flashed by an automatic radar in France. France will send the fine to the Spanish authorities who will then efforce themselves to make you pay it. In that case, paying seems the easiest solution long term.

Paying a speeding fine sent by the french authorities

Should you decide to pay, be advised that the sooner the better. Indeed, the fine is lowered if paid in the first 15 days. As a foreigner however you will be granted another 30 additionnal days to pay the fine, but this may or may not be at the low price (first 15 days price). You can pay by buying in France a number of "timbre amende" (stamp purchased to certify payment of a fine) and stick them to the fine which has to be sent back, or you can pay by check payable to the french treasury (trésor public) , by phone (0820 11 10 10 - 0.12 euros TTC per minute) or via internet on www.amendes.gouv.fr.

If you want to contest, you will have to fill in the form joined with the fine. You may also have to pay a deposit, depending on your request. 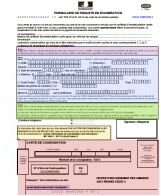 - The vehicle has been stolen or destroyed before the speeding event. You just have to prove it (police report, etc).
- Another person was driving. You can denounce that person by giving his/her complete identity. Don't lie, it'll make things way worse!

Any other reason (or the above reasons should you be unable to produce the proof) will require you to pay a deposit of 135 euros. The deposit, the form and the reasons of the contestation (letter) all have to be sent together (address will be indicated on the form).

Paying the deposit doens't mean the money is lost. However contesting for the sake of contesting may result in a higher fine. You have been advised! The deposit will be refunded should you ask for it and only if :
- The infraction is dismissed by the police, or
- The police doens't dismiss the case, but afterwards a judge discharge you.

It the vehicle has been stolen or destroyed prior to the speeding event you won't have to pay the 135 euros deposit. You will have to fill in the form and join to it :
- Police report of the theft.
- In case of destruction, any paper tending to prove your vehicle has been taken under another person's responsability with orders to destroy it.

Send the whole to the address on the form (4th cadre).

You won't have to pay the 135 euros deposit. Just fill in the form with the information of the real driver. If in doubt over who was driving, you can ask for the picture of the infraction.

If the form is not properly filled in, the car owner will be considered as the driver.

Send the whole to the address on the form (4th cadre).

Payment of the deposit

To pay the deposit, you have 45 days after the date when the fine has been sent (not received). Being a foreigner, you may be granted another month. You can pay using :
- Stamps (timbre fiscal) that can be bought in France newstands and some pubs. Stick them to the form and send the whole to the address on the form;
- Check payable to the trésor public (treasury), to be sent to the address on the form.
- Credit card by calling 0820 11 10 10 (0,12 euros TTC per minute). You can ask to receive an invoice;
- Credit card by connecting to www.amendes.gouv.fr. You will be able to print an invoice.

Asking for your picture

Send a letter asking for the picture of the infraction to the address on the form. Add to that letter :
- a copy of the vehicle registration papers
- a copy of your ID (or passport)
- a copy of the fine or of the form sent to you
- a stamped envelope with your direction.