There are currently more than five generations in service, plus some advanced speed cameras installed on-board police patrol cars.

No picture yet, but you can't miss them. Tall masts with black and yellow stripes. They can catch lorries/trucks. 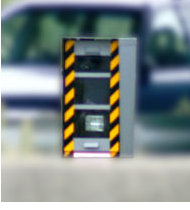 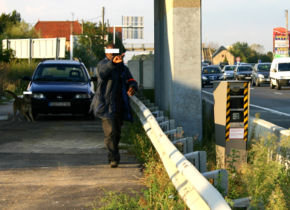 This generation of speed camera is omnipresent. It is pretty small, effective. There are thousands of these. It is the one you will most encounter. Some are clearly visible, some are in a way hidden behind something, like a bridge's piles. Watch them well to recognize and spot them easily on the side of the road. 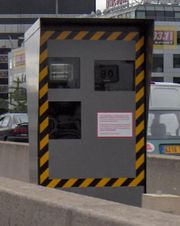 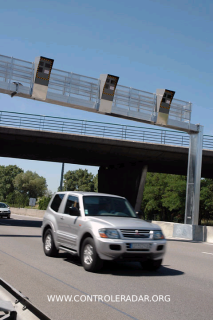 This second generation speed camera is still present yet getting replaced by the generation pictured above. It was a much bigger box. Easier to spot. Few remain in service today. 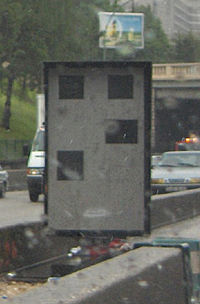 The first model, has mostly been phased out for more advanced models. Not even sure there is still such a model on the roads in 2021. Anyway it looks pretty similar to the second generation.

Ahead of the speed cameras 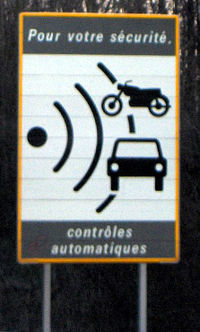 This road sign is one of the most important. It will be visible some distance ahead of a speed camera in France. Distance varies, but usually, the radar is not right after the sign. Allows you to slow down, then forget about the sign, speed up right before the radar. To give a distance estimate for the sake of giving one, expect the speed camera to be within 500 meters - 3000 meters of the road sign, in general.

On board speed cameras 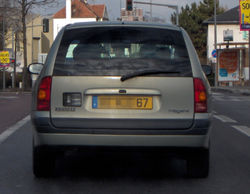 Those are extremely hard to spot. More and more of those cameras are now on board moving vehicles, meaning you can get flashed as you drive along the highway, by a slower vehicle which is in fact a moving radar. Those cars used to be driven by law enforcement, so not many were on the roads due to not enough officers. As of 2021, private companies are now hiring drivers to drive those cars, meaning they will be on the road more often, and longer. Watch out! But watch what? Very hard to spot, vehicles are your usual Peugeot, Skoda, Seat etc.

Some of those photos are protected by the GFDL licence and the CC-BY-SA licence. Céréales killer is one of the photographer.